The last two classes have been mainly dedicated to develop a character. I’ve ended up with dust…

In order to expand a character of our choice Dee gave us few small briefs: “something scary come into the page”, “Something your character created has been destructed; how does he react?”, “Your character win over the sadness so he’s happy” and finally “Your character is confronted to a friend, a foe, or a family member”. Of course, the briefs were initially much more well written, anyway…

So, basically, it’s been about adding expressions – scared, happy, … – and developping related second characters. I decided to carry on with the yellow thing I created during the previous “collage” session.

The “yellow thing” became friend with the plant but he just realised that someone’s gonna kill his new friend: 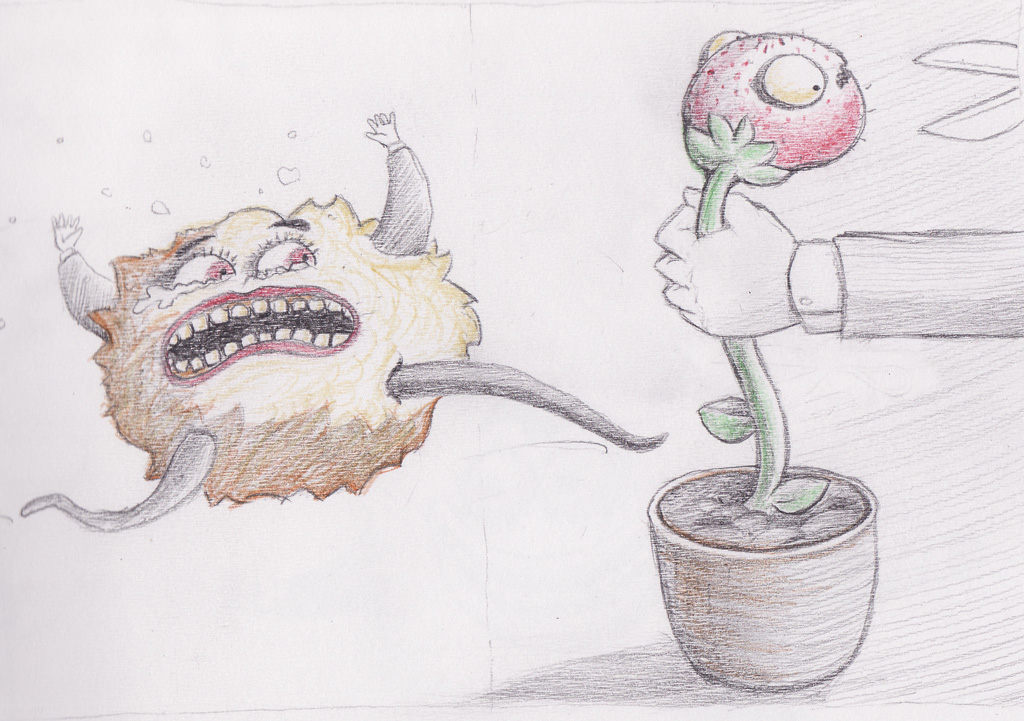 Too late, the plant is dead, nothing will never be the same: 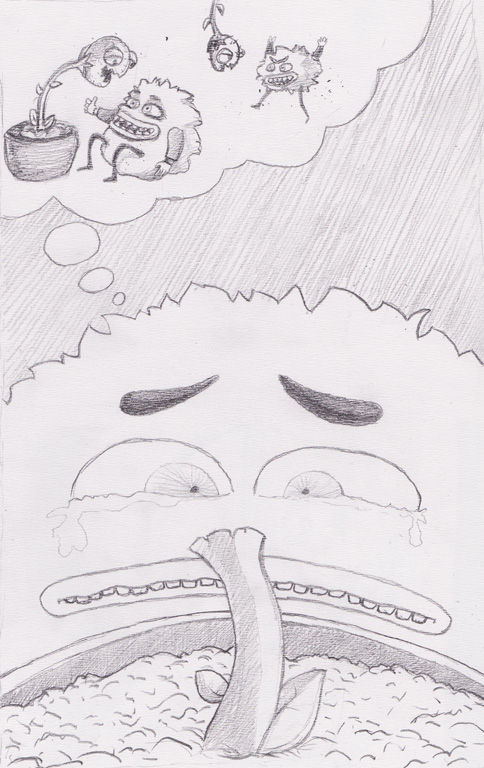 Then, on the “something great finally happened” part, I tried, following Dee’s idea, to do something like: Finally the plant is not dead, she’s got legs now and became independant so the thing is happy… boring. I’ve been also quickly bored of the graphic style of the thing and even the plant, so I take on the last brief with a new version of the “thing” (he might gonna need a proper name at some point…)

Initial idea: the thing meets a friend. Here you go: 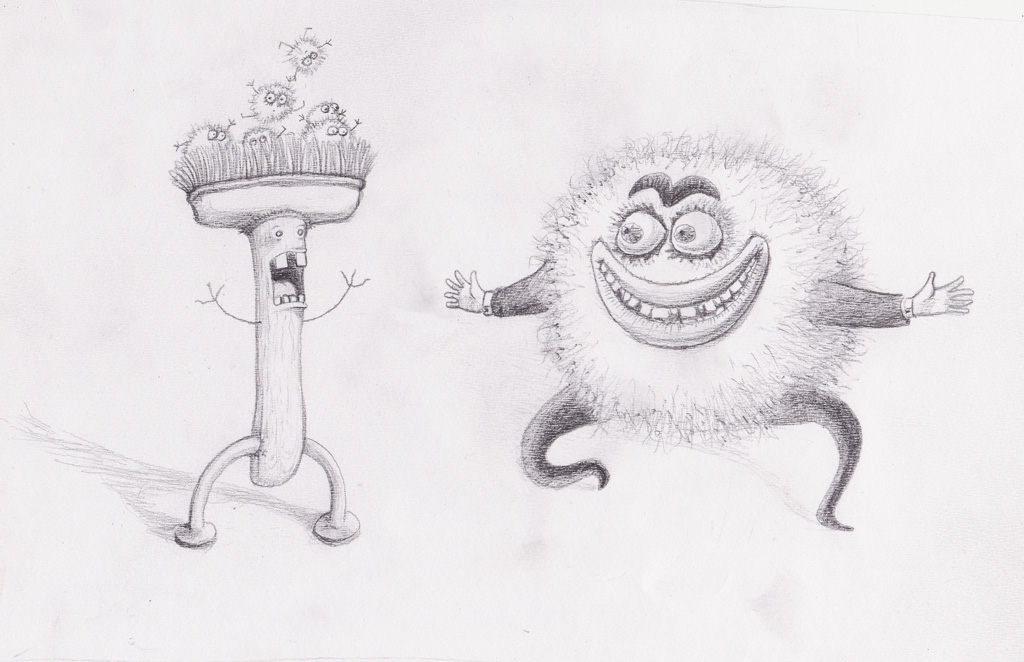 I found from the first sketches that the “thing” – who’s supposed to be a monster – isn’t that scary, so I worked out making his face looking bad by focusing on his big mouth with terrible teeths and his stupid look. Then I tried to make it much more furry and I got the graphical inspiration from a Splat the Cat an very nice book from Rob Scotton I saw the other day in a book store.

But I actually started this sketch with the “thing” friend: a broom. I don’t why I choose to characterize a broom, but it finally brings a meaning and helps me knowing a lot more about my main character (yes, the “THING”!!!!). Here is the final blurb of this sketch then:

“Doom the Broom just meets Nust the Dust and gets frightened as he knows that he will never be able to handle Nust very large size. Dusts are usually much more smaller (see Doom hairs…)”

Here you go the “thing” is actually a ball of dust!!!! It works for me and he’s even got a name: Nust the Dust!

I never really liked keeping on with drawing the same character over and over again but, even if it hasn’t been easy, I enjoyed this process as I started from a “thing” and ended up with something more consistent with a kind of real story behind.

I finally did another sketch where I emphasis on the mini dusts trying to imitate “Nust scary features”: 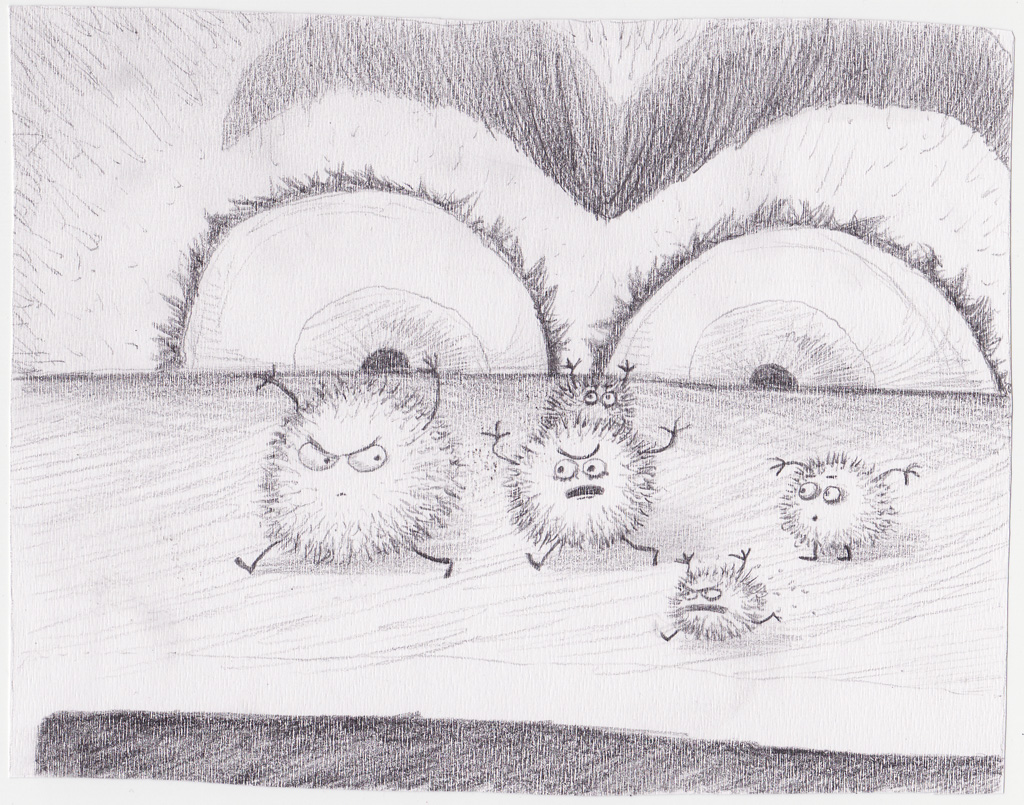